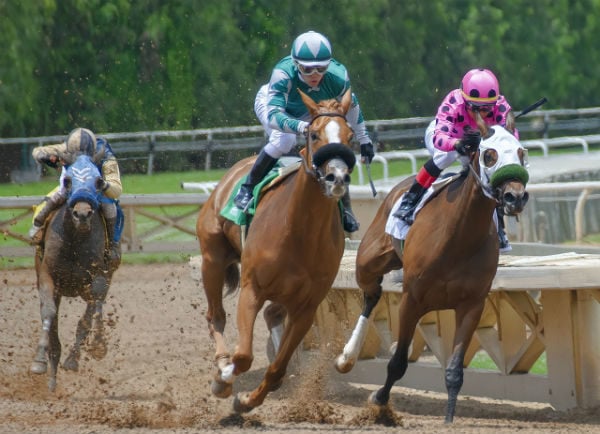 Brother Ian wanted to know why I played the horses. He asked me the question at the dinner table. In the company of the whole family, he asked me. My sister looked at me momentarily and smiled. Their three teenagers, my nephew and two nieces, looked expectantly at me. I am the uncle who arrived at their doorstep during his wanderings over the length and breadth of the republic, his hair unkempt, and with his odd ways of sinning against the household code – like playing the horses.

I wondered how to answer Brother Ian. It wasn’t for nothing that he was known as “Brother” Ian. No, he earned the name because of his status in the church. He was a senior elder, and he took his calling very seriously. On Sundays, for instance, he would be up early for Bible study. Then he would enjoy the hearty breakfast which my sister prepared, and afterwards he would start to groom himself for the morning service. He saw to it that his white shirt was ironed, that his black suit was brushed properly and that the children polished his shoes. Then he dressed. Dressing was a ritual in front of the mirror, and when he eventually appeared in the sitting room to inspect the appearances of the rest of his family, he was immaculately dressed himself.

But I don’t want to be demeaning. Brother Ian was always a magnificent host – as the Bible commanded him to be. It was just that, at times, he could get up your nose with the way he endorsed and enforced the teachings of the Bible. Like demanding an explanation of one’s gambling habits.

I did not really mind being questioned about my regimes and beliefs. It was rather the intention behind the question, which I found difficult to deal with. On the one hand, you had to count your words, so that Brother Ian would not take offense. On the other hand, you had to be careful to choose your words, so that you did not paint yourself in a corner and revile yourself. If you made any mistake, you were quickly embroiled in an exhausting theological debate. And that was something I never looked forward to, especially if I was the visitor and the other had the home turf advantage and the situation demanded a sort of submissiveness from you as the guest.

What did irritate me was that I knew that he was actually trying to use the opportunity to preach, if not for me, then for the benefit of the souls sitting there at the table with me. He intended to introduce a sermon, a dialogue between the cohort of the devil (me) and God’s servant (himself). Thus his wife – my sister – and the kids were meant to hear the lamentable tale of a rambling gambler. Perhaps, the theme he introduced was more for the benefit of my sister. She, with the inclination for adventurous endeavours. She, who would stray and who had to be reprimanded. She, who would make me smile when, more often than not, she stepped over the rope and challenged him with the subtlest of smiles, or a word. Brother Ian, needless to say, then, was of the opinion that adventurous females were always going to chafe at the fibres which tie the family together. The family, which is the sacred institution of God. It is the harbour of well-being for the members. And last, but not the least, there was me, the brother who might lead his family astray.

So, I mulled over the question he put to me. Being a man of dodgy morals, I tested several explanations to submit to his judgment. Like a sinner before God, I racked my brains. I could say, Brother Ian, someone who knows horses, knows which horse in the pack will win. Ergo, there’s no gambling to speak of, when a knowledgeable man goes to the races and bets on what is clearly the best sprinter. Or, I could go to the other extreme and say, Brother, my co-punters and I have no idea which horse will win, and ergo we are just playing the horses. You know, play, like children play.

Or, I could refer to old Jonathan Shirley, a friend of mine of long standing. Look, Brother, I could say, consider Jonathan Shirley. You know why he used to be there in the betting room of the bookmaker? Do you know why? Well, let me tell you: because that was where an old guy like him, who otherwise would have had to stay in his bachelor flat morning, noon and night, found meaningful company. Come with me, Brother, and I’ll show you. But, no, I could not invite him like that. He would never enter the hellhole of a bookmaker’s betting room. So, he would never see how amicably people like old Jonathan were received in the betting room, how they loitered around and socialised. How they found company and comradeship there. Something, I suppose, which Brother Ian could never understand from where he was perched.

I could also profess that playing the horses was simply an extension of my love for horses. My teenage nieces and nephew, in whose company I found myself right then, would understand that line of reasoning. We were, at the very moment, living on a small farm where, in the darkness out there, a patient old mare was grazing in a camp. That wretched old animal was the centre of attention, as far as the kids were concerned. She ambled aimlessly with them on her back just about every day. They, if not Brother Ian, would understand that one could go to the racetrack to enjoy the sight of trained thoroughbreds being put through their paces.

But, of course, that would be avoiding the question. The question, to remind you again, was about gambling. The very act of placing a bet, where betting on horses was incidental. The point that Brother Ian was driving at was, first of all, that greed and love of money was my motive. And that was a cardinal sin!

What I did find irksome, was that he was so focused on the act. That he did not take me into consideration. My reason for betting on the horses had a very personal angle.

Let me explain: I was, I think, not corrupted by playing the horses. But that is what he thought. He could have been right, as far as other people may have been concerned. On the contrary, gambling made me dream – put the stars back in my eyes. It made me starry-eyed like the young people whom I joined around the table. On racing days, I would wake up with no prospect to light up my life. Then I went to the betting room to lay my bets. Then, and until after the races, whether I won money or not, I would walk around and say: what a lovely day, what a future I have! In anticipation of the money I was going to win, I dreamed. I dreamed of what I would buy for myself and disadvantaged people like myself: I dreamed of building myself a house and buying a car. And of travelling to faraway places I had never been able to reach and had only read about. There to smell exotic flowers and spices, and to stand in wonder before celestial castles and palaces. And I dreamed of talking to the inhabitants of these destinations, and smiling with them while watching the poet’s couples making love in doorways. And I dreamed of eating with strangers around tables like the one I was sitting at, at that moment. And I dreamed of being happy. And that is why I played the horses.

But that vision I could not present Brother Ian with. And the children had lost interest, because no answer was forthcoming, and ate their food. And I could hear Brother Ian sighing for my salvation. And my sister, who had lost interest as well, ate mechanically, lost in her own thoughts. Perhaps, if I should ask her, she would confirm that she understood, because I know that she must have yearned herself for something to make her dream again, as well. Something to set her free from the dour constraints, the chains of guilt and fear, which Brother Ian had woven around his family.

But I could never say that to Brother Ian while my feet were under his table. And, perhaps, it wasn’t necessary. Perhaps, all of us there around the table were dreamers – Brother Ian with his expectations of heaven included.