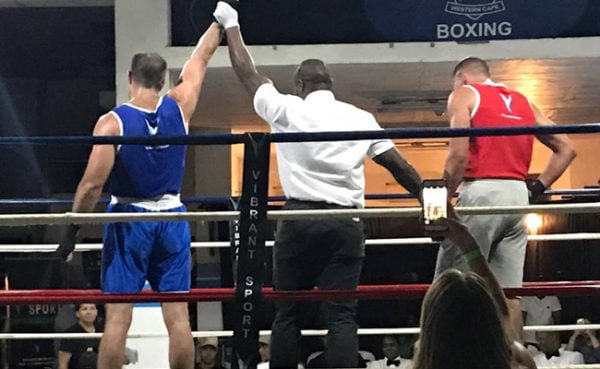 My third amateur boxing match, earlier this month, was a success on many levels. After my last match, my coach Josh Cloete had a chat with me and reminded me why I box: to have a jol. What a profound thought: that I should enjoy boxing – and life. It really was a lightbulb moment for me. For most of my life, I’ve tried so damn hard, and focus solely on the outcome. I have to be the best commentator and the best actor and the best boxer, and to be second is like a fate worse than death. Josh taught me the paradoxical fact when you don’t try so hard and focus so deeply on the outcome, you perform better. And you enjoy yourself!

So I shifted my mindset. Instead of training so I could win my next fight, I trained because I enjoyed it. And in my work, I stopped worrying about being promoted and tried to just enjoy what I was doing.

One of the things that probably also stood in my way was my ego. I wanted people to know I was a winning boxer. I wanted external validation. So this time I didn’t advertise my fight on social media. I didn’t fixate about winning. I went in with three aims: to enjoy myself, to stay calm, and to look for points rather than a knockout.

It was such a different experience. Instead of being lost in a haze of adrenaline and nerves, I could take in the walk-in to the ring, and all the spectators. I had some close friends there, and this time I could really hear them and make out their smiles. The fight began, and after thirty seconds I knew I had succeeded. I was calm and enjoying myself. That was the goal. Everything else was a bonus, including my second round stoppage victory.

It was nice to win, but was better was to enjoy myself. To have my friends there, to take part in a taxing physical sport, to be alive, and to be aware of it all; that’s what made it so special. I felt joy. It was one of the best nights of my life. My opponent was a really great guy. A builder from Hermanus, whom I’ve stayed in touch with.

I’d read things about taking out the ego and being in the present, and they seemed like nice ideas. But it was boxing that made me actually practice them. This is why those involved with boxing love it so deeply. Because the lessons it teaches extend far beyond the ring. It is so much more than people hitting one another.

And from this has come a miracle. I starting to change what drives me. I’m starting to enjoy my life. It feels pretty good 🥊🌈